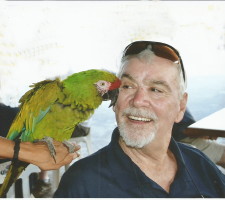 With heavy hearts, we announce the passing of Wayne.

He was predeceased by his parents Gwen and Earl Temple, brother Royden “Tony” Temple, nephew Chad Temple, and mother and father-in-law Evelyn and Prescott Bird.

Wayne was raised in Waskada, and then moved to Winnipeg where he met Joy, his soulmate, his everything.  They were married in December 1969.  To this union, two children were born, that Wayne thought the world of.

The majority of his working years were spent at Health Science Centre as an electrician.  Special times were spent with his family at the arenas, ski hills, the lake, riding his motorcycle, and numerous family vacations.

In accordance with Wayne’s wishes, cremation has taken place and a family interment will be held at Lyleton Cemetery at a later date.

The family would like to extend a special thank you to all the staff at Beausejour Hospital.

Donations can be made to the Lyleton Cemetery, Waskada Cemetery, or a charity of choice.

Offer Condolence for the family of Wayne Temple